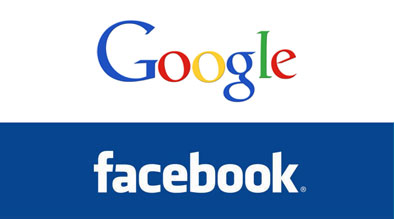 The battle between Google and Facebook continues to rage. While Google is used to being the dominant champion of the internet, commanding the largest number of page views and demanding more internet users’ time than any other domain, Facebook has been nipping at Google’s heels. And while this battle largely exists in corporate domains that none of us care about, there are some key ways in which we are all affected.

Site Visits
For a solid week in March, 2010, Facebook experienced a larger share of visits than Google by internet users in the U.S (according to data by Hitwise). And even more recently, Facebook has taken the lead over Google in terms of how much time users spend on their respective domains in a given month.

Hours Spent Online
Data just released by comScore shows that internet users in the U.S. spent a total of 41.1 million minutes (or 9.9% of surfing time) on Facebook in the month of August while they only spent 39.8 million minutes (or 9.6% of surfing time) on Google. Facebook’s feat is even more impressive when you take into account that the Google minutes include all of their websites, like Gmail, Google news, and even the big time destroyer, YouTube.

Your Time and Money
This does not mean Google is going down and we all need to abandon ship. Rather, it is a reason to rethink how much time and resources are being put into marketing through Facebook. If your company spends many hours and hundreds of dollars a month on Google organic and PPC campaigns, you’ve likely seen great results. Now that Facebook has shown itself to be able to hold users’ attention longer than Google, this is a clear indication that creating a strong presence on Facebook – through engaging fan pages and PPC campaigns – can greatly increase the amount of time that your brand is put in front of your potential customers’ eyes. 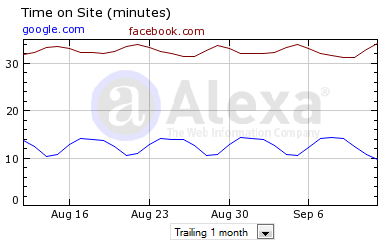